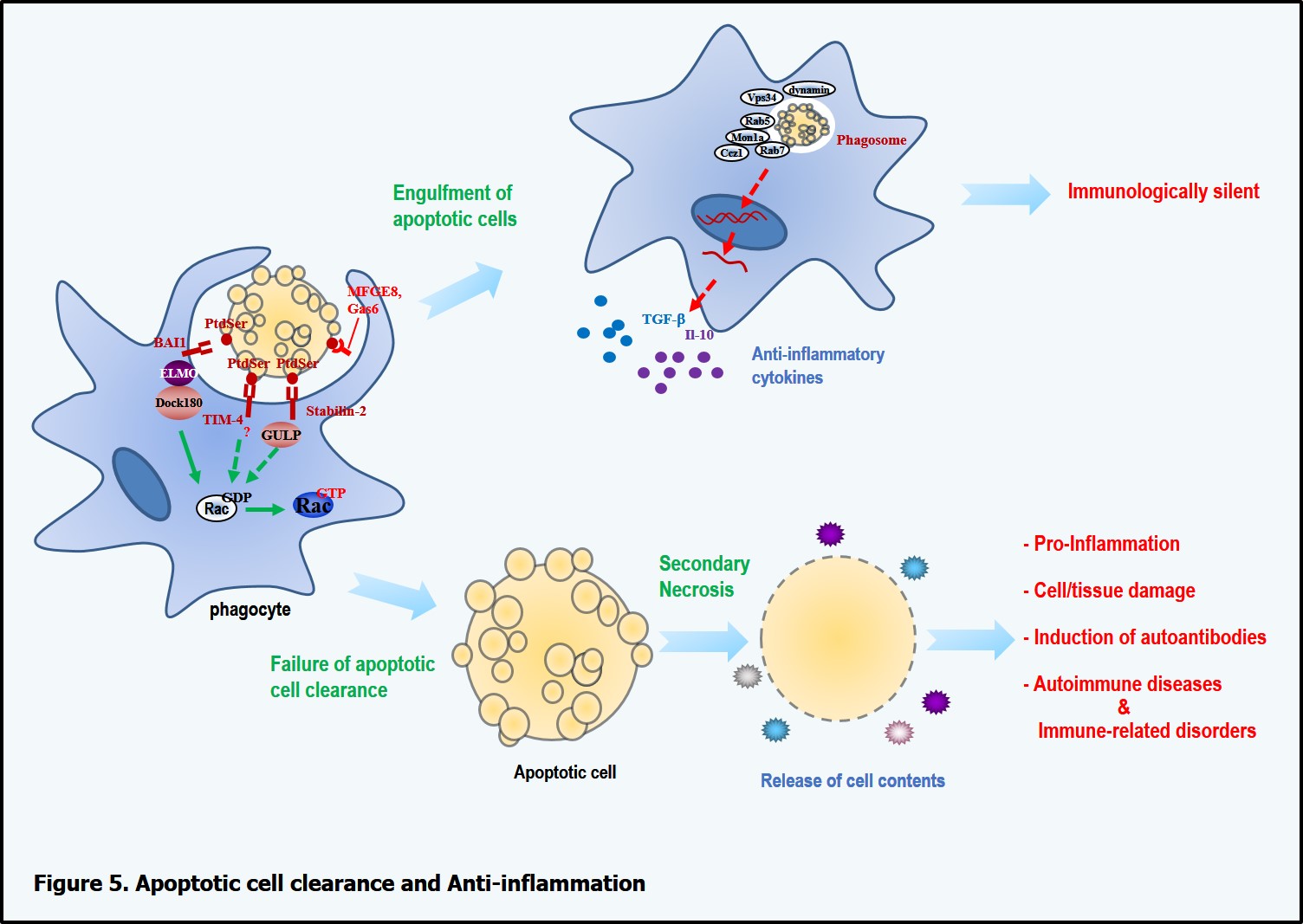 The main consequences of apoptotic cell clearance are “immunologically silent” through the physical removal of dying cells and “anti-inflammation” signal through the release of anti-inflammatory cytokines (TGF-b and IL-10) and the reduction of the levels of pro-inflammatory cytokines (IL-1a and TNF-a) in phagocytes. Efficient and prompt removal of dying cells is very important for preventing apoptotic cells from undergoing secondary necrosis that leads to release of intracellular components via the disintegration of plasma membrane. Released intracellular contents could be toxic to neighbor cells and serve as immunogenic materials to induce strong inflammation. Taken together, BAI1 and/or other PtdSer receptors-mediated apoptotic cell clearance could be implicated in anti-inflammatory response.

For many years, cancer was predominantly considered to be a cell-autonomous process. The prevailing concept centered on genetically transformed cells and their progression to malignant neoplasms. However, the study of the tumor-microenvironment has given rise to the emerging concept that tumor progression is dependent on a dense network of interactions among cancer cells and the surrounding stroma, niche-defining cells and the vasculature. Furthermore, many studies suggest that inflammation in microenvironment surrounding pre-neoplastic cells is closely linked to cancer development through processes that involve proliferative/survival signaling, genomic destabilization, and induction of invasion and metastasis. As shown in Fig. X, tumor-infiltrating myeloid cells contribute to carcinogenesis in various ways. 1) Pro-inflammatory cytokines (IL-1, IL-6, and TNF) from myeloid cells induce STAT3 and NF-κB signaling in cancer cells, which leads to the suppression of apoptosis and the promotion of cell cycle progression. 2) ROS and RNS from neutrophils and macrophages cause DAN breaks, single base mutation or more complex DNA damage. Furthermore, genomic destabilization can be promoted by inflammatory cytokine (IL-1, IL-4, IL-13, and TNF)-mediated expression of activation-induced cytidine deaminase (AID) that induce mutations in crucial cancer associated genes and by inflammatory mediators (IL-1, TNF, and ROS)-mediated suppression of mismatch repair (MMR) proteins that proofread DNA replication error. 3) Inflammatory cytokines (IL-1, IL-6, and TNF)-mediated STAT3 and NF-κB signaling also induces epithelial–mesenchymal transition (EMT) by downregulating the expression of epithelial differentiation markers (E-cadherin) and by upregulating the expression and activity of matrix metalloproteinases (MMPs). EMT is to acquire mesenchymal cell characteristics such as an increased migratory capacity and invasiveness to basal membranes. Although the concept of inflammation-induced cancer has been established during the past decade, the mechanisms that link inflammatory processes on various stages of tumor development remain elusive and the molecular events that coordinate the crosstalk between cancer cells and their inflammatory microenvironment remain to be determined. Furthermore, the concept that secondary necrosis-mediated inflammation induced by failure of apoptotic cell clearance could contribute to and affect tumorigenesis is not proofed.

1) The characterization of the roles of Brain-specific Angiogenesis Inhibitor 1 (BAI1) in cancer development in vivo.

2) The proof of concept that the inflammation induced by failure of apoptotic cell clearance could have a critical role in the process of cancer development.